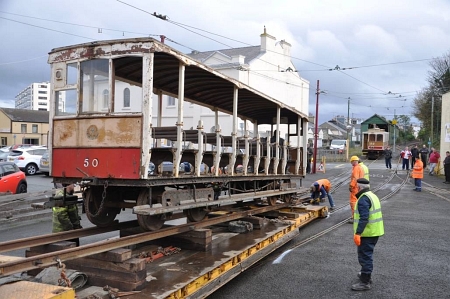 As ever on the Manx Electric Railway, the last fortnight of the 2014 operating season did not see the M.E.R. descend into slumber, with a large amount of activity taking place both on and off the line.

Confirmation that the £1,285,000 required to extensively overhaul Ballure viaduct was gained on the 21st October when the plans were approved and passed by Manx Parliament, with work on the bridge beginning shortly afterwards. Having last seen marginal maintence work in the early 1990s and mid-1980s, the structure is scheduled for extensive repairs including the replacement of all rail-carrying timbers, rails and guard rails as well as upgrading of the line between the viaduct and main Laxey Road crossing. At the time of writing, scaffolding had been erected on the west side of the viaduct with work commencing on the removal of the overhead line following the end of the M.E.Rs operational season, with the work scheduled to be complete by Spring 2015.

Relaying and drainage works at Cornaa (reported in the previous News Update ) were completed on both the seaside and landside line in mid-October, with both lines reopened by the 24th October. Work has continued at both Lag Birragh and Howstrake, with the landside line removed (and, at the former location, the ballast removed exposing bedrock) for replacement works over the winter months. For this duty, the now-familiar Motor-Rail locomotive ‘Pig’ has been returned to service following storage at Dhoon Quarry and is now (at the time of writing) in daily service as part of the track relay works being undertaken by Manx Rail Projects, being moved on the evening of the 26th October.

To accomodate the above, single line working was put into place between Groudle Glen and Onchan Head, with service cars using the sea-side track between these two locations. However, following issues with pointwork at Onchan Head, this was extended between Groudle and Derby Castle (incidently harking back to the first year of M.E.R. operations in 1893 when only a single line existed between the two locations) for the last week of the season. 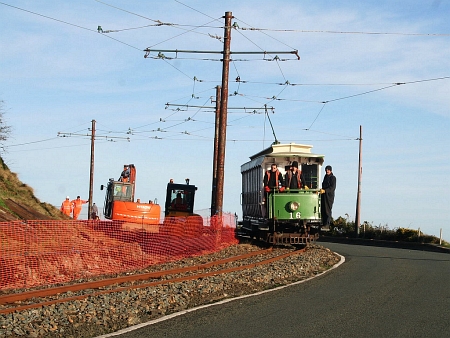 Following repairs to its No.3 motor after its failure at the July Heritage Transport Festival, Crossbench Car No.16 underwent a successful test run to Groudle and return on the 29th October however, not surpisingly, the 1898-built Car saw no further use over the remaining four days of the season. Services during the last week of operation were mainly in the hands of Winter Saloons No.19, No.21 and No.22.

The final day of the M.E.R. 2014 season on Sunday 2nd November saw Car Nos. 19, 21 and 22 remain in service with No.22 arriving at Ramsey at 17:25, as the last service car to do so prior to the renovation project taking place throughout Winter 2014 and 2015 in which the station will be replaced. To commemerate this, the opportunity was taken to pose No.22 in as much of the Ramsey station area as possible, with the Car covering both station sidings, all crossovers, and a trip into the Car Shed prior to stabling for the evening, which was well received by the large amount of enthusiasts present. 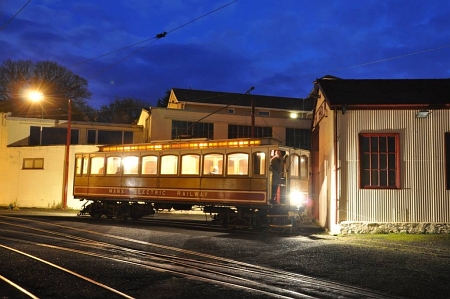 Car No.22 is posed on the rarely-used third siding at Ramsey for possibly the final time, 02.11.14. © Andrew Scarffe

Following the end of services, no time was wasted in clearing long-stored items of rolling stock from Ramsey Car Shed prior to its demolition in the coming months. Contained in the shed were Crossbench Cars No. 14 (withdrawn 1982 and stored at Ramsey since 2009) and No.30 (withdrawn 1970, stored at Ramsey since 2002) along with Freight Trailer No.26 and Trailer No.50. Prior to the removal, No.14 was placed upon an accomodation Brush ‘D’ bogie to enable it to be shunted, having previously been stored on wooden blocks in the shed. Removal of items started on Monday morning with No.22 re-emerging from the shed after its arrival the previous evening to assist moving Trailer No.50, using the little used second shed track in the process.

With the arrival of the Yellow Simplex and Ballast Hopper F.70, both usually found on the Steam Railway, these were positioned on the third siding prior to Trailer No.50 being loaded onto the same articulated lorry that brought F.70 to Ramsey. The Simplex was then used to shunt Car No.30 and Freight Trailer 26 into the other side of the shed for easier access, while No.50 was transported to Laxey station and stabled overnight on its low loader. No.22 meanwhile had returned under its own power to Derby Castle during the afternoon, enabling the work teams at Ballure to remove the poles and wires on Ballure viaduct for work to start.

The following morning (04.11.14) Trailer No.50 was unloaded and shunted by hand to Laxey Car Shed, being the first of the Ramsey exiles to arrive on site for further storage. Following this, the low loader returned to Ramsey to collect Car No.30 which had been moved into the station area for loading. This was achieved during the morning, with No.30 leaving the M.E.R. for the first time since its delivery in 1904. Fortunately this departure was brief, with the Car returning to the system in the mid-afternoon following unloading at Laxey and shunting to the Car Shed, this time by fellow Crossbench Car No.32. At Ramsey, Freight Trailer No.26 became the next item of rolling stock to be removed from Ramsey Car Shed, and was winched aboard a waiting low loader, spending the Tuesday night awaiting unloading in Laxey station.

The next morning (05.11.14) saw Freight Trailer No.26 moved for berthing inside Laxey Car Shed Road 1. The movement of the final piece of rolling stock from Ramsey Car Shed, ‘Ratchet’ Car No.14, was also undertaken, with the car towed from the rear of the landside Road to another waiting JCK low-loader. Upon arrival of the low-loader at Laxey, it was unloaded and moved to Laxey Car Shed by Car No.32. Unusually, Car No.14 was unloaded the opposite way round, with the Brush ‘D’ truck now at the Derby Castle-end. Also present in the station at the time were Car No.33 and Trailer No.45 (in use on rail-recovery duties from Dhoon Quarry), and Snaefell Car No.4, on permanent way duties.

Car No.14 awaits its berth inside Laxey Car Shed with Car No.32, while Car No.33 waits with Trailer No.45 in the background. © Guy Pescodd

Thanks to all who have provided information and photographs for use in this article.