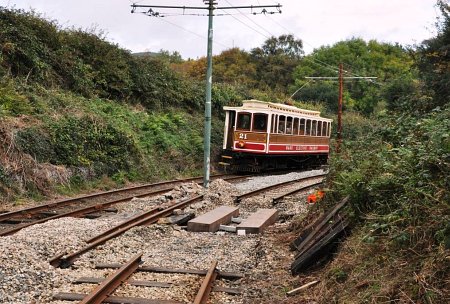 With less than a month to go until the end of the 2014 season, various developments have began to take place on and around the line in relation to the usual winter works regieme.

The start of October saw the closure of the sea-side line at Cornaa for renewal of both the track and drainage culverts in the area, with services running on the land-side line only between The Garey and Lewaigue. At the time of writing, this work had been completed and attention has turned to similar works on the land-side line in the same location, and these are expected to be completed by the end of the month.

On the southern end of the line, renewal and repairs to the pointwork at Groudle saw single-line working again in force between Onchan Head and Scarffes Crossing from the 29th September. With this work completed, single line working has remained in place between Onchan Head and Groudle to allow contractors to replace lengths of life-expired trackwork over the winter – this continuing similar works that have been in place on this stretch over the past few years. The opportunity was also taken by the Overhead Line crews to install new section gaps in the Derby Castle area during this period.

Finally, funding has been sought for the repair of Ballure Viaduct over the winter months. The 160-foot long steel viaduct, built in 1899, was last overhauled in 1981 and, apart from minor timber repairs carried out in 2011 and 2013, is now in poor condition. Permanent repairs are expected to cost £1,285,000, including replacement of heavily-corroded parts of the structure and a complete replacement of the timber decking and rails, as well as track relaying both on the viaduct and as far as the level crossing of the Laxey Road to the north.

On the line, passenger figures have remained well with larger than average numbers of passengers taking advantage of the decent weather encountered on the island. Evening services on the line continued to be popular until the last day of evening operation on the 19th September, alongside Snaefell Dining trips which continue to run into October.

October 3rd saw shunting of stored vehicles take place at Laxey Car Shed, to make room for the exodus of vehicles currently stored at Ramsey Car Shed, which is scheduled for demolition this winter as part of the Ramsey station renovation program. The moves saw vehicles stored on the former ‘No.4’ siding for the first time, with No.27 placed on blocks in this area, and No.26 making its first outside appearance since 2011. The four items of stored rolling stock at Ramsey ( ‘Ratchet Cars’ Nos.14 and 30, Trailer No.50 and Freight Car 26) are expected to move imminently.