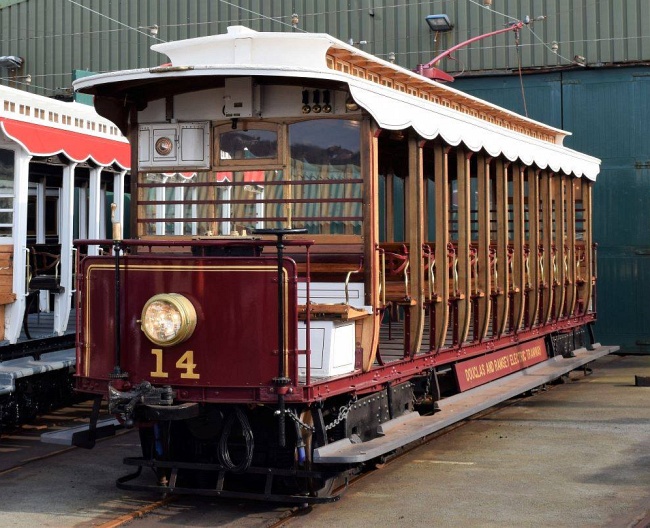 Car No.14 was built in 1898 by G.F.Milnes as the first ‘Open Crossbench’ motor car for the M.E.R. These cars were a departure from the saloon layouts of Cars 1 to 13, and shared a similar layout to the existing trailer vehicles. This series were the first cars to gain the then-new ‘E.C.C’ trucks, with four 20hp traction motors. Apart from being fitted with roller shutters and extended footboards in the early 1900s, No.14 remained largely as-built throughout her career, receiving K12 Controllers to replace the original K11s during 1946, but later being swapped with another set of K11s from Car No.5 in 1963. It received damage to the Ramsey-end bulkhead in August 1955 after a collision with Car No.22 at Lewaigue, but was quickly repaired and returned to traffic the next year.

No.14, like most of the Cars that were not fitted with air brakes were used less frequently once Island tourism levels fell in the 1960s and early 1970s. A return to regular service beckoned in 1977 after the reopening of the line to Ramsey after two years of closure, and subsequent shortage of cars, however No.14 was withdrawn from passenger use two years later during 1978, soldiering on afterwards with the Overhead Line Department until she was stored in 1982 at Derby Castle Car Sheds. It was later moved to Laxey Car Shed during September 1996, later receiving damage to it’s Derby Castle end dash panel in a shunting incident with Car No.17 in 1997.

No.14 was one of several cars to leave the system in April 2002 to be stored in the former Homefield Bus Garage in Upper Douglas. It returned to M.E.R metals in December 2009, moving to Ramsey Car Shed for further storage, with the Ramsey-end truck removed in-situ and replaced with wooden sleepers. In October 2014 and with the demolition of Ramsey Car Shed imminent, the car was floated at the Ramsey-end with a Brush ‘D’ truck, in preperation for it’s move south. The move itself was undertaken in early November, No.14 moving by low-loader from Ramsey to Laxey with the Car placed for further storage inside Laxey Car Shed (albeit back to front as previous).

During March 2015 the restoration of the car to operational condition was announced, and Car No.14 was again partly re-floated under a Milnes Series 3 truck (previously from Car No.31), and moved from Laxey Car Shed to Derby Castle Car Sheds. Following extensive restoration from derelict condition by volunteers and workshop staff over a three year period, the Car was officially launched back into service as part of the M.E.R. 125 celebrations in September 2018.

Car No.14 is used on special events and for Ultimate Driver Experience courses throughout the season.