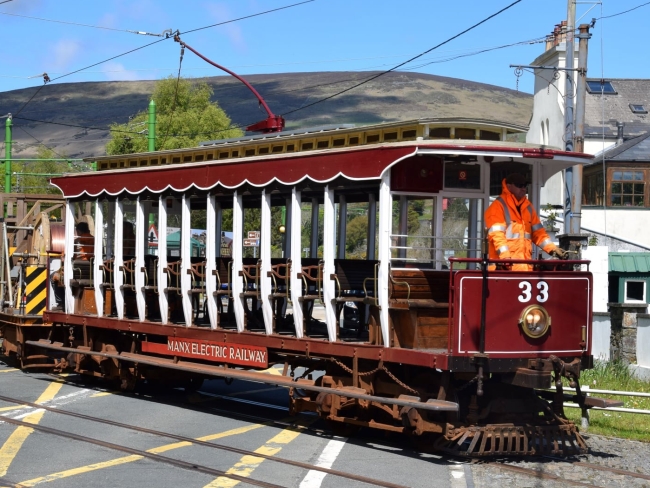 The final Motor delivered to the M.E.R, No.33 was built by the United Electric Car Company in Preston in 1906. Along with Car No.32, No.33 was the final development of the M.E.R Crossbench design started with the No.14-18 series in 1898, and incorporated several unique features, fitted with Brill 27CX trucks and four G.E 27 1/2 hp traction motors, making No.33 (as well as No.32) the most powerful Motors in the fleet. No.33 is one of the few cars that has a ‘regular’ allocated trailer, in No.61, also delivered in 1906. An interesting anecdote is that both No.32 and No.33 are wired in the opposite direction to the rest of the M.E.R motors, giving reason to assume that the Cars were delivered onto the M.E.R the ‘wrong way round’.

No.33’s Brill 27CX trucks were regularly transferred to under freight locomotive No.23 in the winter months between 1926 and 1944, a practice reinstated in May 1983 and May 1984 when No.23 returned to service for a brief period for enthusiast events. No.33 also holds the accolade of being the only M.E.R Car to operate on another line following extensive periods in service on the Isle of Man Steam Railway in 1998 and 1999 (as well as training runs in 1997) following the conversion of Open Wagon No.8 into a Van to house a diesel generator.

Car No.33 has recently been in use with the Overhead Line Department, at points during 2012, 2013 and from 2015 onwards, replacing fellow Car No.32.  No.33 sees intermittent use on services and special tours, mainly during the summer seasons and transport festival periods.