Car No.6 with Works Trailer No.45 at Ballaragh in early January 2013. © Andrew Scarffe

As well as operating services in December and January, the Manx Electric Railway has contiuned to make an active presence over the winter, with the railway taking the opportunity to carry out a large amount of maintenence over the last few months.

The track repairs south of Groudle started in November have been continued, with work continuing south past Groudle Old Road stop (Pole 107), and the road crossing here being relaid as well as both the landside and seaside lines, as part of a rolling program of level crossing replacements in this section.  This section is also being relaid with concrete sleepers to match those installed late last year (between Poles 111 and 116). It is understood however that Lag Birragh crossover has not been removed as planned.

Further north, drainage works were being undertaken in mid-February south of Baldrine at Pole 212. Although this has required the closure of the line in the immediate area, the work is being carried out privately to allow drainage for a field to the west of the line.

In a season that has resulted in several landslips on the line (two occured in the Ballabeg and Fairy Cottage areas in the autumn ), a third slip appeared in January at Pole 260, a few hundred feet north of Ballagawne stop. At this point the line is on an embankment above the A3 road however the landslip was fortunately minor, with no damage to M.E.R. permanent way or the adjacent roadway, and has since been repaired.

Work has continued inside the new Laxey substation. An underground 11kv connection to the Manx National grid installed on the 11th November last year, with the substation now awaiting planned repairs to around three miles of overhead wiring on the system before its connection, and the closure of the current 1934-built Laxey Substation. 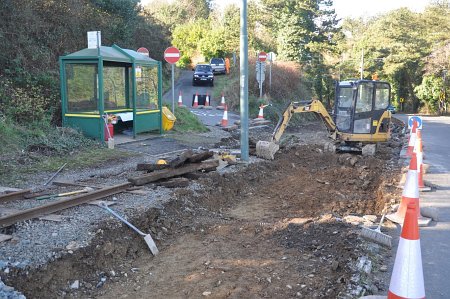 Further drainage works have been taking place at ‘Windy Ridge’ between Belle Vue and Ballure. A 5 metre deep drain is to be dug on the seaside line, similar to that installed on the landside line in this location over the 2011/2012 winter.

Major work has also been undertaken on Ballure Viaduct during the first two months of the year, with new timberwork being installed under the rails on both the landside and seaside lines. The 1899-built bridge last saw major works attention in 1991 when the previous timbers were replaced along with the bridge parapets and ironwork recieving attention. 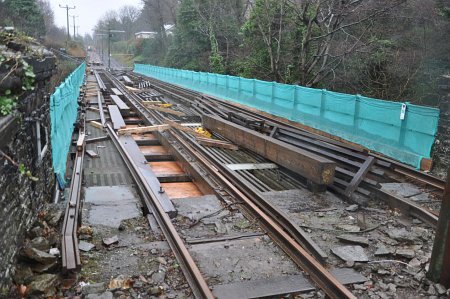 With the M.E.R. season beginning on Saturday 9th March, a lot of work is still required to be completed in the next two weeks however such an intensive amount of investment over the winter is to be welcomed and various areas on the line have been improved for years to come.

Thanks to Andrew Scarffe and Isle of Man Railways for information.