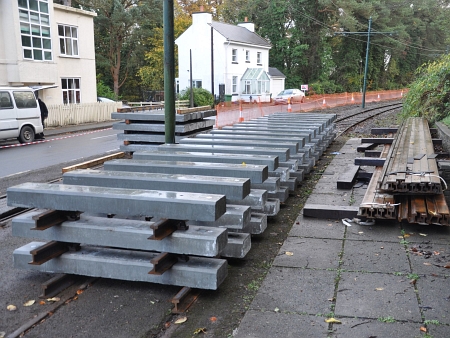 The second of this years ‘Pie In The Sky’ stargazing events took place on the 28th and 29th September and again proved very popular with both evenings saw Winter Saloon No.19 and Winter Trailer No.58 in use. Both nights were fully booked and were blessed with fine conditions on top of Snaefell.

Work continued on the new Laxey Substation building, with the outside of the building substantially complete by the end of the month.

The M.E.R. suffered from two isolated floods in the second week of October. The first, at Bibaloe Beg (between Eskadale and Baldromma), occured on the evening of Thursday 11th however the railway escaped with only minor damage allowing the line to reopen on Saturday 13th (with no services scheduled on the Friday). Around 10am on the Saturday, further torrential  rain resulted in a landslip immediately south of Ballabeg Station.  Unfortunately this was more substantial with a culvert under the line collapsing and a 10 foot chasm appearing under the trackbed. With full line services immediately suspended, the railway operated in two parts;

Work crews immediately began repairs on the damaged section of line and had reinstated the culvert as well as relaying ballast and track in two weeks, in time for full line services to resume on Saturday 27th October.

During the works, the Branch Line Society hired Wickham Railcar No.8849 for two tours of the Laxey area on the 22th October. The Wickham was used to convey tour participants over areas of track not regularly used in passenger service including the Transfer Siding, Dumbells Row siding and various station crossovers.

October also saw the announcement of a limited Winter Service in December – the first for several years.

A further incident affected operations on the 2nd of November when a large tree fell onto the line at Ballagorry, severely damaging Pole No.634. The service between Laxey and Ramsey was suspended however services were restored by Saturday 3rd, using the landside line only between The Garey and Ballaskeig crossovers.

Another popular event took place on the 3rd November, this being the first Winter Photography session. This saw the first scheduled use of Trailer No.52 as part of a passenger service since at least the late 1940s and what will most likely be the last passenger departure from Laxey Blacksmith Siding before the Laxey rebuild.

Permanent Way works began immediately after the end of the main season, with a planned track relay on two sections south of Groudle Glen (Poles 104-107 and 111-116). Both works concentrated on the seaward side line (which has not seen attention for some time) and also saw a departure from normal methods with the use of panelled concrete sleepered track. Once in place, the rail was welded to create sections of continiously welded rail. This practice is commonplace in the UK and has been used on the Steam Railway however it is the first time these techniques have appeared on the Manx Electric. It is understood that the whole stretch of the seaward line between Harbour Road (Pole 41) and Groudle Glen is planned to be relaid this Winter, with the crossover at Lag Birragh (Pole 74) being removed in the process. Works Trailer No.45 has been in use removing the used rails and sleepers to Derby Castle for onward processing.

Work also continued on the new Laxey Substation, with the building fitted out electrically by the Manx Electricity Authority during the earlier half of the month. The Substation was connected to the national grid with an underground 11kv supply on Friday 16th although at the time of writing the substation is not yet ‘live’.

< Back To Latest News