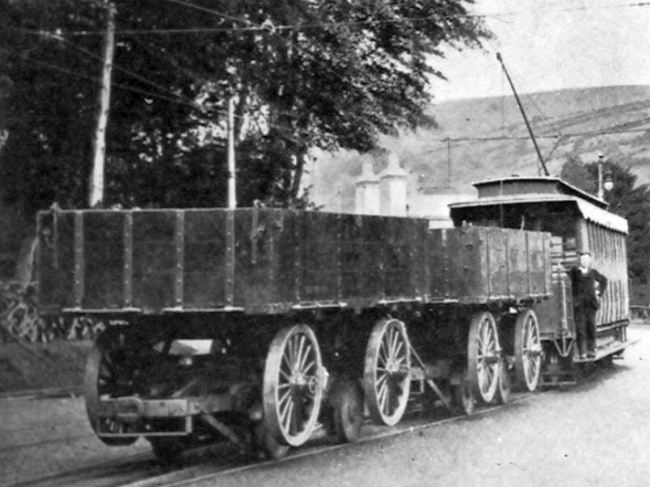 Two of the Bonner Wagons at Laxey with a 14-18 series Car. © Website Collection

Four Bonner Road/Rail Wagons were ordered in 1899 by Alexander Bruce for operations for parts of the towns “without the assistance of rail lines” (In the event, only three were delivered). They were a cutting edge design, with the rail wheels lower than the road ones, and the transfer being completed by shunting the wagon into a siding with ramps either side of the track, raising the wagon to release its rail wheels, allowing the wagon to be hauled away on the road!

The wagons were intended for use transporting coal from the quay at Ramsey to Ballaglass Power Station, and for moving stone from the Dhoon Quarries to Ramsey Harbour. Road/Rail Transfer Points were constructed at Derby Castle, Laxey and Ramsey, but complaints about noise saw the Ramsey equipment moved to Queen’s Drive.

The three entered service in September 1899, presumably on the above duties. An order for six more wagons was rejected by the supplier in Ohio in 1900 after the financial difficulties of the IOMT&EPCo, and crash of Dumbells Bank. After a period of storage behind Ballure Car Shed, two of the three Wagons were scrapped. The fate of the third remains unknown.