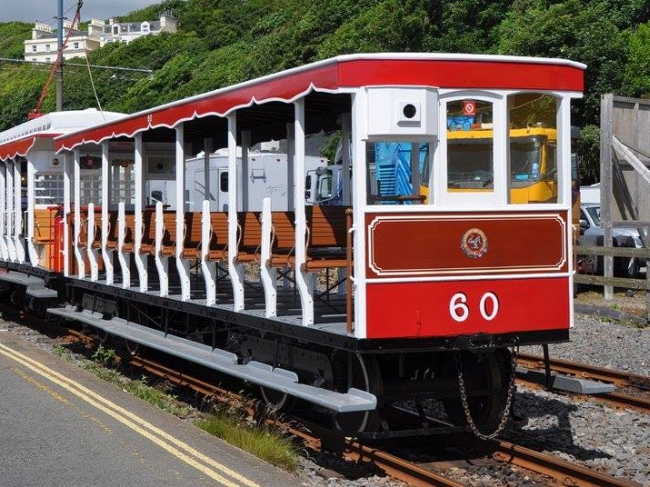 Trailer No.60 was constructed as a one-off in 1896 by G.F Milnes, very similar to the 49-54 class of Trailers, and the Douglas Cable Cars constructed alongside it. It was built with the initial numbering of No.27, being moved to No.60 between 1903 and 1906 with the conversion of the 1898 Trailer series to Motors, which took the numbers 24 to 27.

The trailer narrowly escaped being destroyed in the Laxey Car Shed fire in April 1930, being drawn out during the blaze and repaired and rebuilt straight after, re-entering service the next year! No.60 retained it’s rebuild paintwork (re-varnished in 1944) up until the mid-1960s, where it received white additions to the roof supports and ends. It was stored in 1984 and placed undercover in Laxey Car Shed, re-emerging for the Year of Railways in 1993. No.60 was then moved to the IoMR’s Douglas Carriage Sheds in October 1996 during the rebuild of the Derby Castle Top Sheds, returning by December 1997.

No.60 retained its mid-1960s paintwork throughout the late 20th Century, but in Spring/Summer 2000 the trailer was treated to a coat of Nationalised Green to match ‘Paddlebox’ Car No.16 (No.60 did not carry the livery during the period, the only trailers being painted as such being No.50, No.61 and No.62). It suffered damage in June 2004 to the Derby Castle end bulkhead during a shunt at Laxey, but was repaired and returned to traffic in 2008. No.60 was found to having had worn axles in Spring 2009, and was passed for a limited use-only basis, being withdrawn from service at the end of the year. After a period of testing in Autumn 2012, No.60 returned to service following a full truck overhaul undertaken in Derby Castle’s Bottom Shed in May 2013, and returned to the standard Red/White livery in Winter 2016/17. The trailer remains in traffic, making rare appearances on the timetabled service and times when additional capacity is required.