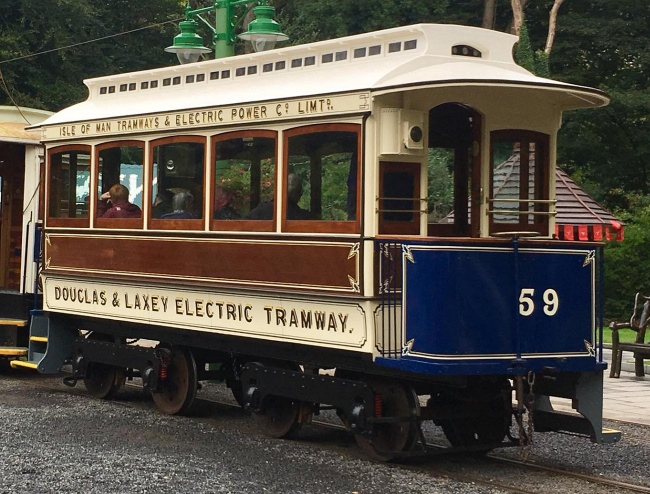 History
Trailer No.59 was constructed in 1895 by G.F Milnes as a ‘Special Saloon’, for use by the Directors and their guests. It is thought it was built with the initial numbering of No.26, being moved to No.32 in 1903, then becoming No.59 by 1906 with the construction of the U.E.C.C Motors. It was originally built as a four-wheeler (the only example of a non-bogied trailer on the M.E.R), but was fitted with bogie trucks in 1900, due to it being very susceptible to derailment!

It’s most famous duty was on the August 25th 1902, where it conveyed King Edward VII and Queen Alexandra from Derby Castle to Walpole Drive, being hauled by a Winter Saloon, and has been known since as the ‘Royal Saloon’. The trailer was only used on passenger service regularly from 1933, when it was re-modeled, with the platform entrances rebuilt to coincide with the Car it was being towed by. It was again used on Royal Duty on September 13th 1975, carrying King Edward VII’s niece, HRH Princess Alice, who made a trip from Laxey to Ramsey in company of the Island’s Lieutenant Governor at the time, Sir John Warburton Paul.

No.59 saw use at the Isle of Man Sea Terminal in 1977 as a tourist office, returning later in the year to undertake short periods of use as a waiting room at Derby Castle. The trailer has seen long periods on display (mostly in connection to the first Royal Visit), at the Ramsey Electric Railway Museum from 1979-1991, and the M.E.R Ramsey Visitor Centre from 1993-1999. It had its first overhaul in many years from July 2004 til April 2005, which included much bodywork repair (and the fleet number being moved to a strange position on the side of the end bulkheads!). In March 2015, Trailer No.59 was stored following a derailment at Ballagawne in March 2015, pending further investigation and testing. Following evaluation, No.59 was selected for repaint and overhaul to the trucks in July 2018, commencing shortly thereafter.

No.59 returned to service as part of the 125th Anniversary of the M.E.R. in September 2018 carrying its as-delivered livery of Blue and Ivory with full company branding and can be seen in use on regular occasions.