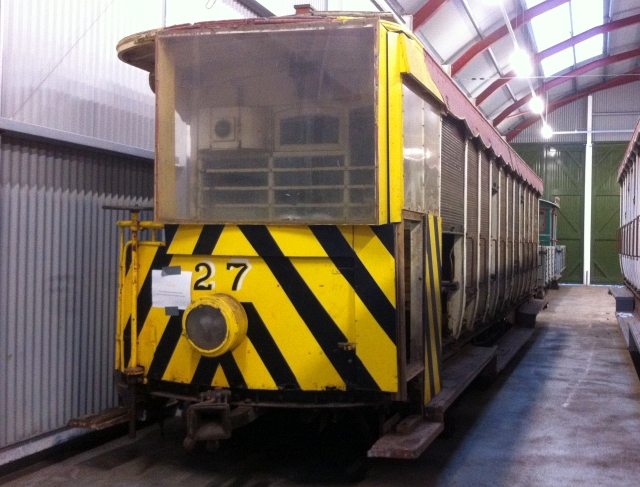 History
No.27 was originally delivered as Trailer No.22 in 1898, in line with the rest of its series. Following the delivery of the ‘Winter Saloons’ in 1899, it was renumbered as Trailer No.43, although she did not keep this identity long, being motorised with new Brush ‘D’ trucks in 1903 while also gaining air brake equipment and a renumber to No.27.

It led a usual role in the passenger fleet until 1986 when it became a dedicated ‘Works Car’ for the Overhead Line Department. After a few years in this role, No.27 obtained an enclosed cab and windscreen in 1993 (similar to that used on Car No.1 in the 1970s) to protect the controllers and motorman whilst working in off-season weather.  It was then treated to a coat of yellow on the bulkhead ends during Spring 2001, later augmented by black ‘Wasp Stripes’ during the Autumn/Winter.

Unfortunately these modifications did little to prolong it’s life span, and No.27 saw little use following it’s further modifications, being officially stored during Winter 2002. It last ran under its own power in 2003 (moving back and forth between Derby Castle and Ramsey Car Sheds for further storage), finally being moved for storage inside the Derby Castle Bottom Shed during Summer 2004, alongside classmate Car No.25. During September 2009 it was re-trucked under a set of Milnes Series 1 Trailer trucks, and was moved to Laxey Car Shed, where it is now stored on sleepers.

< Back to Trailers
< Back to Motors