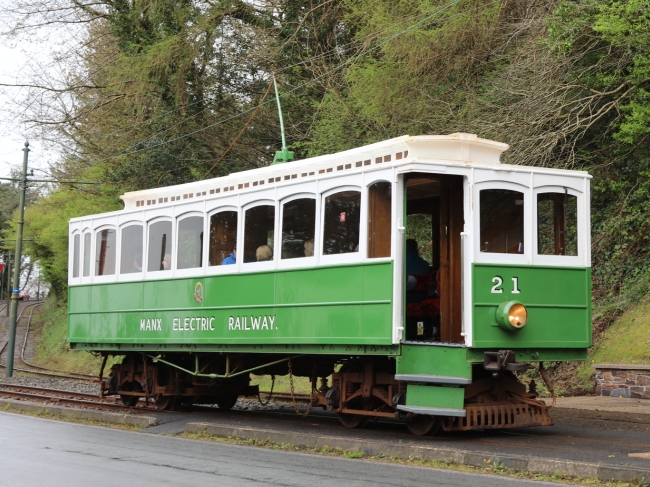 Car No.21 is the third of four Winter Saloons built by G.F.Milnes and delivered to the M.E.R in 1899. The Car was fitted with Milnes Series 3 trucks (powered by E.C.C Motors) and noticeably larger than any of the previous saloon designs fitted with forty seats. Following the delivery of the 28-31 series in 1904, No.21 quickly received the newer equipment from Car No.30 in September 1904, gaining its Brill 27CX Trucks and air brakes while donating its original less powerful equipment to the now-Ratchet Car.

No.21, in common with the other Winter Saloons, became the backbone of the M.E.R fleet due to its capacity and all-year round comfort. The Car has seen few major changes apart from gaining K12 controllers in 1936 (replacing the original K11 design) and new seats in 1932, as well as modifications to its compressors and air brake equipment in the 1960s.

The Car was one of three Winter Saloons to carry the ‘Nationalised Green’ livery in the late 1950s however this was quickly removed. The Car was also repainted into a representation of its as-delivered ‘Douglas Laxey and Ramsey Electric Railway’ livery during Spring 1981, returning to traffic by late May. No.21 received an exhaustive overhaul between 1993 and 1995 returning to the traditional 1904 livery, although a repaint in 2002 saw it branded with contemporary ‘Isle of Man Transport’ emblems. These were removed when the Car was repainted in time for the 2007 season. Car No.21 remains one of the mainstays of the M.E.R fleet, regularly running above 10,000 miles a year.