Car No.1 and No.2 have been in use throughout the summer on their ‘D’ Timetable diagram, which included the 11:10 to Laxey, 12:55 return, and 13:40 to Ramsey, 15:10 and return. No.1 has received a brand new steel trolley pole, which has cured the dewiring issues that it was suffering from last year.

Car No.7 returned to traffic in its repainted blue and white ‘Douglas and Laxey’ guise in early May. Car No.9 was repainted at Derby Castle Car Sheds during the late Spring and early Summer, and was fitted with external bulb-based illuminations previously carried on Snaefell No.4. The Car returned to traffic on the 27th of the July, operating shuttles to Groudle as part of the Manx Heritage Transport Festival.

Progress on Car No.14 has seen further bodywork attention undertaken to the roof and Ramsey end platform of the car. It is understood that the electrical work is to begin this Winter, with the first sets of 20hp motors being removed from the trucks for overhaul.

Car No.32 returned to traffic following its truck overhaul last year in early June, working on Mad Sunday with Trailer No.58. The car has made intermittent appearances on the timetabled service since then, working usually with either of the Winter Trailers. Car No.33 has been in use as the Laxey-based Permanent Way Car during the Spring and Summer months, and was returned to passenger use for the TT and Transport Festival periods.

The M.E.R Crest, carried by repainted Car No.7. © Andrew Scarffe

Alongside the motors, all currently serviceable trailers (barring 51) now carry the traditional M.E.R crest – carried previously until the 1990s but in recent years has not been used. Trailers No.41 and No.43 both returned to traffic following repaints in the Spring, with No.43 seeing its most frequent use on the timetabled service in the past 4-5 years. Following a full repaint into blue and white, Trailer No.48 returned to traffic in late May, seen frequently with partner Car No.7.

Trailer No.58 returned to traffic following derailment damage repairs on Mad Sunday, 5th of June behind Car No.32, albeit in a ‘under refurbishment’ form for the duration of the TT Period. After the events conclusion, the trailer had finishing touches applied and made its debut in full ‘as built’ guise on the 29th of July, as part of the ‘A Feat of Engineering’ trip hauled by Car No.9.

Trailer No.59 is to be overhauled during the Winter period following a period of storage after a derailment at Ballagawne in February 2015. The trailer is expected to receive the overhauled Brill trucks previously carried under Trailer No.55. 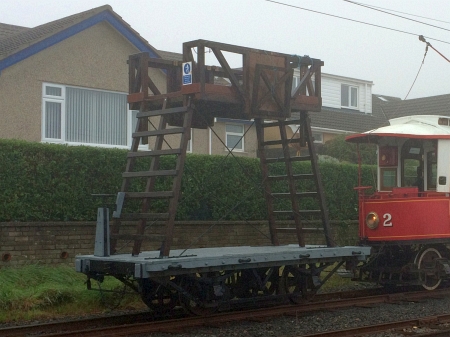 Wagon No.1 had its tower refitted in June, albeit at a shorter height for use around the Derby Castle yard. It returned to traffic on the 28th of July behind Car No.2, working a special trip to Dhoon Quarry and return. Wagon No.10 has received attention to its axleboxes and springs in June.