February 2015 has seen another busy month on the Manx Electric Railway, with several areas of work on the line approaching completion in time for the start of the 2015 season in March.

The extensive overhaul of Ballure Viaduct, covered in previous news updates, has continued with the frames having being grit-blasted by the start of the month. Following this, brackets were fitted for new heavy-duty plastic sleepers used to support the rails with this work being completed by the end of the month. Time has also been taken to repaint the framework into M.E.R. green and replace the coping stones located on the lineside walls between the viaduct and A2 road crossing, which has also been refurbished with new rails laid onto a concrete base, seeing the road crossing closed for a short period in early February. Further work in this area has seen a further track relay take place for around 200 yards immediately north of the road crossing.
A full ‘News Extra’ report is available to view HERE. 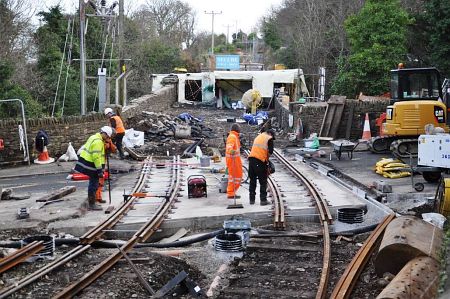 Work undertaken in the station area at Laxey station, 14.02.15

At the Northern terminus, the application for the redevelopment of the Ramsey station site has been refused, with no work having been undertaken on the site following the removal of rolling stock from Ramsey Car Shed last November. The station and surrounding area was proposed to become a transport interchange including a covered M.E.R. and bus station alongside a bus depot including bus washing and fueling facilities however these have been rejected by local ministers. It is currently unclear as to what, if any, work on alternative schemes will take place at Ramsey and it is understood that no changes will be made to the station area prior to the start of the M.E.R. season in March.

Elsewhere on the line, the replacement of both the rail and road surface at Ballagawne level crossing took place in the final days of the month with the crossing closed to both road and rail traffic. In an unusual twist, the crossing was floodlit during hours of darkness to allow for safe pedestrian access.