In the 1880s the Isle of Man was gripped by the tourist industry proper. Douglas Bay was rapidly filled with boarding houses and hotels offering the best in accommodation. Two businessmen, Alexander Bruce, a Glaswegian Banker and Frederick Saunderson, a Civil Engineer, focused their attention to the large Howstrake Estate to the north of Douglas, with the idea to build on the boom and construct a large scale housing development and pleasure grounds.

Plans were drawn in 1889, approval being granted in 1892 by the Manx Parliament, Tynwald, for the Estate to be purchased in the name of Mr Saunderson, backed by Mr Alfred Jones Lusty, a retired London Merchant who lived on the estate. Approval was given on a preliminary with the condition that a road must be constructed to give access, which required a sea wall to be constructed from Strathallan across Port-E-Vada creek, which would in turn allow the land behind to be reclaimed. Final approval was only given with the condition that the road was to be accompanied with a tramway ‘to be operated by animal, steam, electric, or any other power.’

With legalities settled, the objective was clear; to construct a road and railway from Strathallan to the end of the Howstrake Estate above Groudle. Bibaloe, the next Estate, was owned by Mr R.M Broadbent, who was planning to market the Groudle Glen as a tourist attraction, with an additional hotel. Little time was spent obtaining the necessary land to bring the railway to the entrance! 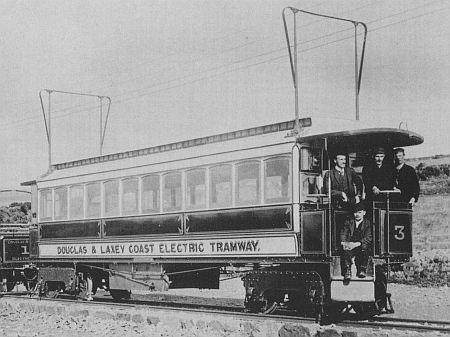 A test run at Braeside in Summer 1893, with Car No.3 in original condition, and several engineers and IoMT&EP Co. dignitaries present. © Mather and Platt

Bruce, Saunderston and Lusty then formed themselves into the Douglas Bay Estate, Ltd, with the registered intent of building a road and railway as far as Groudle, and the construction of an electric plant behind the sea-wall at Port-E-Vada. It was then the decision of Bruce to find the best advice for the construction of an electric railway, eventually referred to Dr Edward Hopkinson, a partner in Mather and Platt, Salford, who had previously worked on the City and South London Railway.

Work began in Spring 1893, attention being focused mostly on the railway rather than the road, other than keeping it level with the track and separating it! Track arrived in May, allowing for a single line which was laid on the seaward side, allowing for doubling if needed. 3ft (914mm) Gauge had already been agreed as the standard after the success of the Isle of Man Railway’s 3ft lines from Douglas. 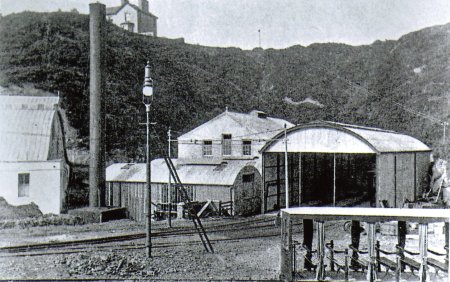 The depot was constructed at Port-E-Vada; a three track-nine car building containing inspection pits, with adjoining workshop and boilerhouses, equipped with a 60ft Chimney. It took the name of Derby Castle, a private dwelling from the early part of the 1800s, and from the theatre and pleasure grounds being constructed at the same time as the railway.

By the start of August, three Unvestibuled Saloon Cars (No.1-No.3) and six Open Trailers (at the time No.11-No.16, (now No.49-No.54)) had been delivered by G.F Milnes and Co of Birkenhead. The Cars were equipped with bow collectors at each end, similar to that currently carried by the Snaefell Cars. Teething troubles delayed the start of operations, the first car not reaching Groudle until the 26th of August. Free rides were available for the public, who were waiting eagerly for the new experience!

On September 7th 1893 the regular service was started, continued for 17 days until the 28th for winter closure. During this time 20,000 passengers were carried at the minimum fare of 3d. The Manx Electric Railway was open for business! 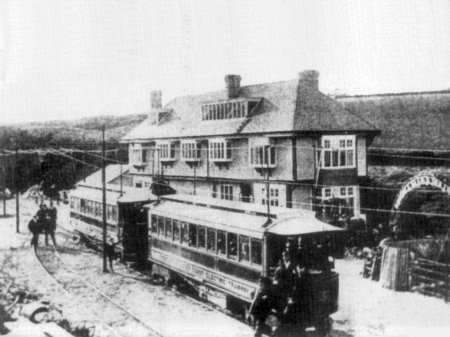 The Groudle Glen Terminus in 1893, with Car No.3 and either of Car No.1/No.2 present. © Website Collection

< Back to History
Forward to ‘Onwards to Laxey’ >