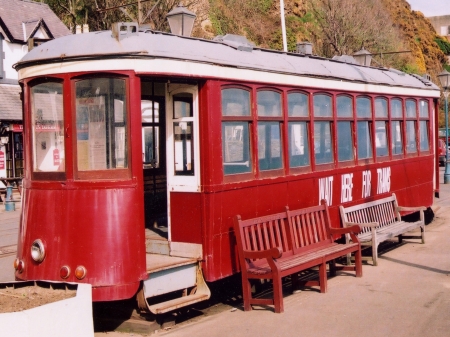 History: Lisbon No.360 was purchased by the M.E.R in mid-1996 (arriving in May and touching down on M.E.R metals in June) for potential re-use on the Manx Electric.

It was found however to be too wide, and spent it’s time stored in the Derby Castle Bottom Shed. It was then decided to use No.360 as a waiting shelter (without trucks) at Derby Castle in May 2000. After a period of nearly two years use, the tram was moved to the Homefield Bus Garage in Upper Douglas, in April 2002 for storage. It was then moved out during the mass exodus in December 2009, and taken to JCK Balthanes haulage company yard in Ballasalla, later being sold and moved in Summer 2013 to a private residence.

< Back to Infrastructure – Waiting Shelters