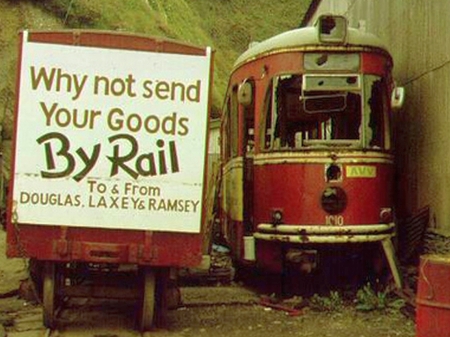 History: In the late 1970s, it was clear that the equipment on the Snaefell Mountain Railway’s Cars was beginning to become life expired. Searching for suitable replacements for the cars, the Chairman J Lucas and General Manager H Gilmore of the M.E.R board, together with two London Underground Engineers,  journeyed to Aachen, Germany, and found the 1956 production tramcars to have suitably adaptable equipment.

After the Aachen board agreed to sell 7 of them (1003-5, 1008-11), 6 of them were sent to Lots Road Power Station in London for stripping and subsequent disposal. London Transport’s original intention was to fit as much of the spares as they could in the remaining car, itself intended as a source of future spares (No.1010) and transport it to the IoM, however, when the car arrived on the island at Douglas in November 1976, it was found to be empty, LT sending the wrong one by mistake!