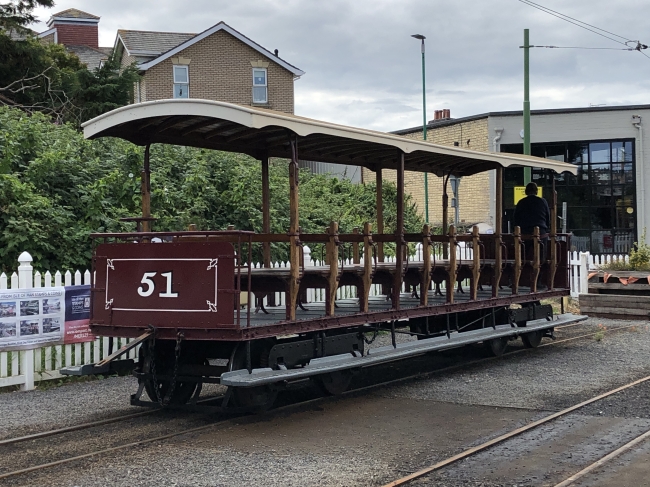 History:
Trailer No.51 was the third trailer built for the Manx Electric Railway in a batch of six built in 1893 by G.F Milnes of Birkenhead, as No.13. It later was renumbered in 1895 to No.25 after the construction of the 10-13 Car series, again renumbered to No.30 in 1898 with the anticipation of the 24-27 trailer rebuilds, and finally No.51 in 1903/04 with the construction of the 28-31 series. It was rebuilt with a canvas roof in 1894/95 from it’s condition as a fully open trailer, and rebuilt again in 1903 with a curved wooden roof. A post-war rebuild in the 1940s saw higher glazed end bulkheads added. No.51 was one of four Trailers offered for sale by the M.E.R in 1978, however no successful bids were received. It was still available for summer work until the early 1980s, where it was withdrawn from service and stored in Derby Castle Car Sheds.

No.51 re-emerged as No.13 in 1987 after an initiative by the Isle of Man Railways and Tramways Preservation Society (then the Isle of Man Railway Society) and Isle of Man Railways, rebuilt back to 1894 condition (with the roof previously fitted to Trailer No.52, removed when the trailer was placed on permanent use with the Permanent Way Department in 1947, kept at Derby Castle Car Sheds and never replaced, and a set of dash panels previously fitted to No.52 and No.53) and renumbered to suit. No.51 spent the next decade appearing in traffic predominately with with Cars No.1 and 2.

It regained it’s No.51 number during Spring 2001, and remained an occasional runner. The trailer was stored at the end of the 2010 season in Derby Castle Top Shed pending a truck overhaul, which was carried out at Derby Castle Bottom Shed during Winter 2012, returning to traffic in May 2013.

In the Winter of 2017/18 No.51 was repainted by volunteers into its early 1900s guise, with a white roof (applied to lightweight trailers of the period) and the original style of Milnes numbering. The trailer makes occasional appearances on timetabled services and times when additional capacity is required, but appears regularly at enthusiast events.