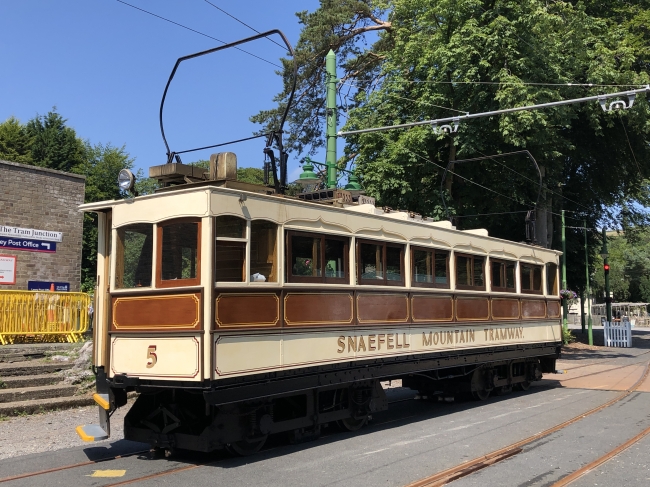 Car No.5 was delivered to the Snaefell Mountain Railway in Spring 1895, the fifth of six identical vehicles built by G.F. Milnes of Birkenhead. In common with the rest of the fleet, the Car was delivered unglazed however this had been fitted by 1896, and a roof clerestory the following year to increase the levels of comfort for passengers. Mather & Platt electrical gear and control systems were used, and the Car had gained a roof-mounted advertising board by the early 1900s.

The Summit-end Control equipment was changed in 1903/04 from the original Mather and Platt example to use a General Electric K11 Controller, and later a K12 Controller in 1954. Apart from this, the Car remained little altered for nearly seventy years, although No.5 regularly swapped its trucks with Works Car No.7 until at least the early 1950s.

On the 16th August 1970, a fire started by an underfloor short circuit whilst No.5 was at the Summit, and the vehicle was rapidly reduced to its frames, trucks and one cab end. The fire was initially blamed on the advertising board fitted to the Car, with high winds causing No.5 to ‘rock’ and loosen wires, however it is now thought that the regular swapping of trucks between No.5 and No.7 mentioned above meant that the Cars wiring was in far poorer condition than any of the six passenger Cars on the system, meaning an electrical fault caused the events that year.

With the frames and trucks reusable, a new body was built for No.5 by H D Kinnin of Ramsey, being built in only eleven months. The superstructure remained mostly the same however the Car was not rebuilt with a clerestory, and was fitted with modern bus-style windows. The ‘new’ No.5 returned to active service on the 8th July 1971. The Car was also fitted with cushioned bench seats and remains the only Snaefell vehicle to be so fitted.

Although the original equipment was reused, it would be replaced itself seven years later, with the original Mather and Platt traction motors becoming worn out. The decision was made to re-quip the entire 6 car-fleet as a whole with materials and control equipment from German Aachen Tramcars fabricated inside replica 1895-style trucks built by London Transport. No.5 was the last Snaefell Car to use it’s original 1895 Mather and Platt motors and Trucks, ending an era on the last day of service for 1978, the 30th of September. Following this, it was moved to Derby Castle Car Sheds on the M.E.R. for refitted, and returned to Snaefell in Autumn 1979 with modernised electric equipment and regenerative braking.

No.5’s last trip on the Manx Electric for overhaul at Derby Castle Car Sheds was during October 1996. Whilst at Derby Castle Car Sheds, No.5 was repainted with the title  ‘Raad-yairn Snaiull‘ on the sides (Snaefell Mountain Railway in Manx Gaelic). A wheelchair lift was preliminarily fitted at the right-hand Summit end of No.5 (but was removed after Health and Safety discussions) and the aluminium-framed windows were removed for conventional wooden ones.  No.5 was the last Car to receive attention at Derby Castle (all further work is now undertaken in-house at the Snaefell Car Sheds), moving back during May 2003. Today No.5 carries the original S.M.R. livery of Teak and Ivory.