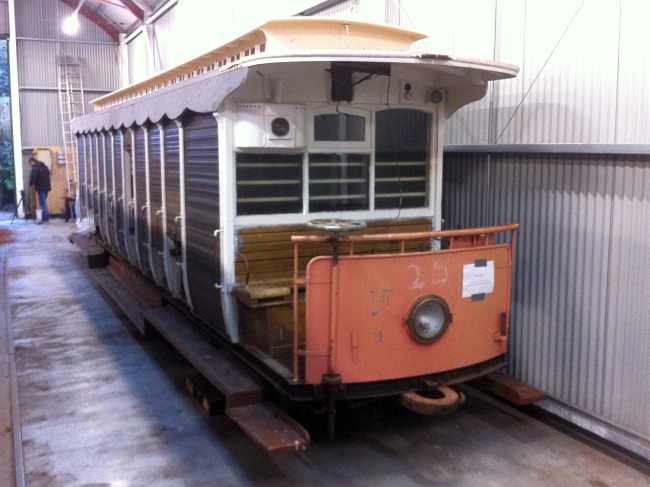 It led an usual fleet existence until 1977 when it and Trailer No.55 (also renumbered 25 for the occasion!) were repainted into Silver livery to mark the silver jubilee of Queen Elizabeth II’s coronation. After this all to brief claim to fame, the car was repainted into the normal Red/White scheme shortly after, but retained the silver lining to it’s valance.

No.25 saw use as a works car in the early/mid 1990s (making brief returns to passenger duty in the early 1990s), when it became the dedicated Ramsey-based Permanent Way Department car.  Unfortunately, it was withdrawn in 1996 and stored after persistent electrical issues, first at Ramsey Car Shed, later moving to Derby Castle Car Sheds. No.25 was earmarked an overhaul during 1998, which partially took place until 2003, but was never completed.  After handing over her trucks to the ‘new’ Locomotive No.34 in 2003, No.25 is now stored in Laxey Car Shed on wooden sleepers.

< Back to Trailers
< Back to Motors