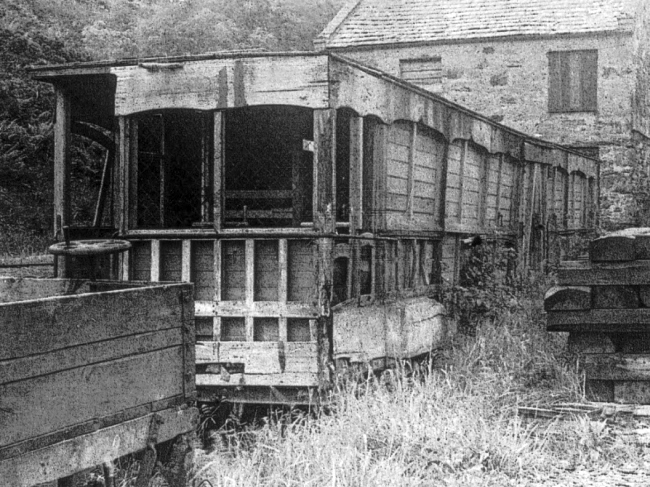 Car No.13 stored outside the ‘Creosote Cottage’ at Dhoon Quarry in the 1950s © Travel Lens Photographic

Car No.13 was built in 1895 by GF Milnes and Co as a ‘Vestibuled Saloon’ passenger car, fitted with standard Milnes Series 3 trucks, powered by 2x25hp Mather and Platt traction motors, and Mather and Platt controllers. It was withdrawn in 1902 and stored inside Laxey Car Shed after only 7 years of service (with potential re-gauging and re-use on the Snaefell Mountain Railway at the time mooted).

No.13 was later sent to Derby Castle Car Sheds for rebuilding in 1918, re-emerging soon after as Freight Trailer No.23 (renumbered in the Goods Fleet), painted in a light grey colour scheme, with one of the six window and seating areas removed on both sides and replaced by a set of double doors, the access to the passenger area from the cab and bodyside windows panelled off, and the powered Milnes trucks exchanged for un-powered trailer examples.

It was renumbered to No.22 after the scrapping of the Cattle Trailer No.22 (previously Car No.12) in March 1927, allowing Locomotive No.23 to re-gain it’s original number after it’s post-accident rebuilding. No.13 was then used as a mess-hut in the sidings at Dhoon Quarry from 1936 onwards, and was officially written off in 1944. Scrapping came in 1957 during the post-nationalisation clearing of the Dhoon Quarry sidings area.

< Back to Motors
< Back to Wagons