With excitement growing for the London 2012 Olympics, the olympic torch procession was to visit the Isle of Man for a day on Saturday 2nd June. The torch was scheduled to visit a selection of historical venues and travel on several iconic items of Manx Transportation over the days events, and the M.E.R. was no exception. With the torch planned to visit the Laxey Wheel, theM.E.R. was enlisted to transport the torch between Derby Castle (after arriving via Horse Tram and Bicycle along the promenade) and Laxey.

With the torch planned to visit the Laxey Wheel, the M.E.R. was enlisted to transport the torch between Derby Castle (after arriving via Horse Tram and Bicycle along the promenade) and Laxey. With a tight schedule in place, a 12:40 departure from Derby Castle was put into place. The torch, having travelled along Douglas Promenade with help from Gwynne and No.44 on the Horse Tramway, and on bicycle with Tom Black, arrived at Derby Castle at 12:35 carried by Cai Benyon (member of the IoM Under 21 Hockey Squad).

Waiting at Derby Castle was Car No.1 (recently restored to service two months before) and Trailer No.59. Initially No.7 and No.48 had been allocated for the role but the opportunity was taken for the pioneer car to take the limelight. Once the procession (and various TV crews!) were on board, the ensemble departed a busy Derby Castle for a similarly crowded Laxey station, with Cai, No.1 and the Olympic Torch being the focus of camera attention before the torch’s transfer to the top of the Laxey Wheel. 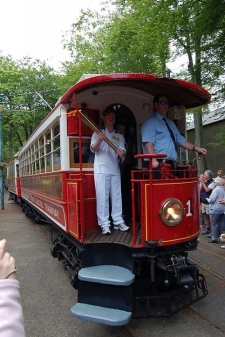 The above picture shows Car No.1 arriving at Laxey with the Olympic Torch procession.