Both Cars No.1 and No.2 continued their roles with the Permanent Way and Overhead Line departments throughout the 1970s, retaining them upon establishment of ‘Isle of Man Railways’. With the Centenary of Electric Traction celebrations looming in 1979, the opportunity was taken to restore the pioneer Car No.1 to full passenger carrying condition.

Car No.1 was taken out of traffic from Permanent Way duties in the Winter of 1978/79, and sent to Derby Castle Car Sheds for a full repaint and overhaul. This included a full bodywork rebuild inside and outside of the car, the removal of the windscreens, new dash panel ends being fitted, the chassis being straightened out (following a collision with a traction pole in May 1977) and a full repaint in the Spring in an interpretation of it’s original livery in Red, White with Lined Teak sides and red painted trucks. For the first time since the 1930s, it carried lettering, the original ‘Douglas & Laxey Coast Electric Tramway.’ being applied. However, in an effort to retain the corporate image of the railway, small ‘Isle of Man Railways’ boards were applied beneath the underframes on both sides (removed by 1982).

The Car re-entered traffic in the Spring, back to working exclusively passenger services, which it had not done since the early 1940s! It made a starring role in the Centenary of Electric Traction Cavalcade in May of that year, alongside it’s less-fortunate sister Car No.2. However, fortunes for that car were soon to change too! 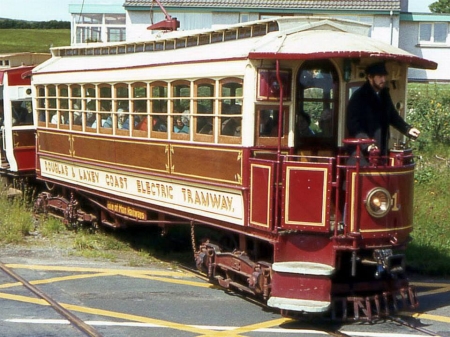 In the above picture, Car No.1 passes over Ballabeg Level Crossing with Trailer No.42 in the early 1980s.