Traffic was primarily handled between dedicated Docks at Derby Castle, Laxey and Ramsey, with services for the farmers markets possibly being the main sources. Car No.12 was rebuilt to handle the traffic in 1903, with two dedicated bogie wagons with high-slatted sides (Numbered No.24 and No.25) following in 1904. Photographic record of either of the three is few and far between, but it is to be assumed that No.12 would’ve hauled either of No.24 or No.25 on this traffic, the second bogie wagon being hauled by another Car if the demand was great. A recent photograph has shown one of the Sheep Trailers being hauled by a ‘Winter Saloon’ into Ramsey, so perhaps this is the latter of the suggested workings. 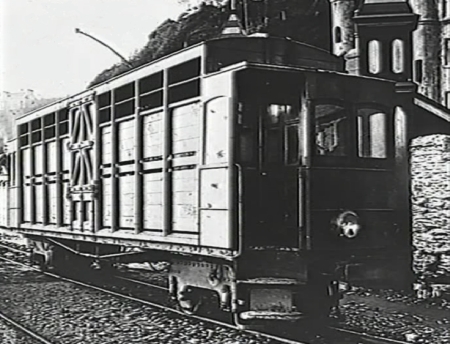 Car No.12 post conversion as a Cattle Car, © MER

No.12 became a Trailer (No.22) during 1912 (perhaps due to using 17-year-old traction motors that were not replaced during the re-equipment programme of 1902-04, and became worn out).  This allowed the facility for three separate trains to be ran, Motors could tow either No.22, No.24 or No.25 on a working.

Demand for moving Cattle by the M.E.R fell by the 1920s, and No.24 and No.25 were rebuilt in March/April 1924 as Stone Wagons, with new bodies, leaving just No.22 left in serviceable condition. The traffic was un-officially brought to a close during March 1927, as No.22 was cut-up, due to the limewash used to dis-infect the floor of the Trailer had corroded the chassis to an extent where it required severe repair (found as not worth it due to the demand for livestock transit).

< Back to Features – Freight